The art of rope rescue

Typically trainee members of the Dartmoor Search & Rescue Team – Ashburton undergo a training period of between 12 – 18 months, and if the training is completed successfully they are presented with their team jackets as they become fully fledged members.

Members have to attend at least 12 winter and 6 summer Wednesday night training meets every year to maintain their position on the callout list. On top of the wednesday night sessions, further demands on a member’s time is made with attendance at fundraising sessions and supporting events such as Ten Tors, the Haytor Heller and the Abbot’s Way walk to name just a few, not forgetting callouts obviously.

Within the team we have specialist teams that have an expertise in an aspect of search and rescue beyond that of the rank and file member. This involves more commitment on a members time as they train beyond the normal Wednesday nights frequently at weekends, to maintain their skills to the higher standards required in the specialism.

The specialist teams currently are:

All the above teams in-part their specialist knowledge to the rest of the team members as part of the normal Wednesday night meets, to help maintain all member’s skills to the high level demanded by Mountain Rescue England & Wales (MREW).

The rope team held a weekend rigging course last weekend to train members who had expressed an interest in becoming members of this specialism, myself included. The weekend started with a lecture on the rigging systems used and the background theory in forces and loading systems within safety limits. Then it was off to Chudleigh Rocks to put the theory into practice.

The first day was spent on vertical stretcher lowers and the techniques in setting up the anchors and lowering / raising systems. This meant sending Fred our rather heavy manikin safely over various rock cliffs in a stretcher, attending to his needs half way down as the ‘barrow boy’ checked to see if he was conscious following his imaginary vomit!

Sunday the practical sessions concentrated on horiziontal stretcher rigging systems and the techniques involved in effecting safe rescue. The weekend came to an abrupt end late Sunday afternoon as we were called out to an injured walker at Shipley Bridge, so it was throw the kit in the back of the landrover and head off to the RV, only to be stood down 30 minutes later.

All in all an absolutely superb weekend, expertly facilitated by the established members of the specialist rope team. Thanks guys, The weekend was spent predominantly in the autumn sunshine, and all 7 members passed the course. Perfect. 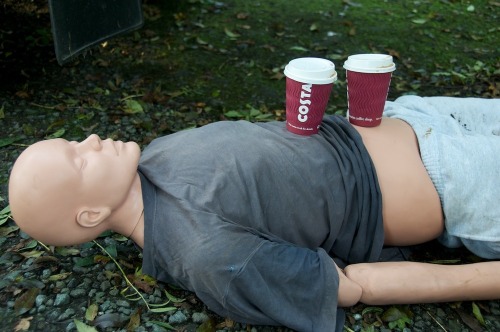 This entry was posted in Devon and tagged Dartmoor, Dartmoor Rescue. Bookmark the permalink.