Reflecting on our 2 weeks on the North Island it has been good …… very good. We’ve driven 1870km and seen some fabulous countryside. 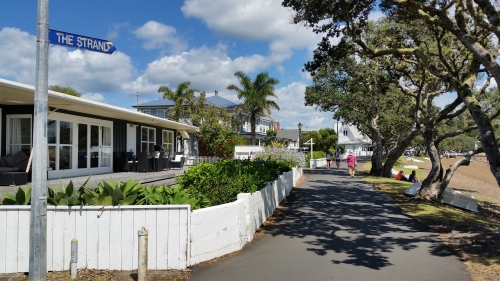 The beautiful town of Russell

Historic, genteel, peaceful, picturesque and warm. Our trip out to the ‘Hole in the Rock’ (famous apparently although I’d not heard of it before I went there), via some of the Islands from where the area gets its name, was fabulous with the added bonus of seeing a pod of dolphins.

The scenery continued as we headed west from Russell through some rolling green and lush countryside emerging on the west coast at the spectacular Hokianga Estuary with towering sand dunes almost like snow tipped mountains. From there we began our long journey south that would eventually lead to Stewart Island at the southern tip of the South island. Our first stop the mighty and ancient Kauri Trees with the father of them all Tanu Mahuta, over 1,000 years old, quite serene holding court over the younger and less substantial cousins.

Next Waitomo Caves with its glow worm inhabitants shining like the night sky on a clear winters night before visiting the tourist and volcanic hot spot of Rotorua. Although busy Rotorua has a charm and, along with Russell, would be somewhere I would like to comeback to as our visit was too short.

The Tongariro Crossing with the masses – a subject I’ve already blogged about – before visiting the ‘Coolest small capital in the World’, Wellington – I think the cool refers to the temperature, bbrrrr!

Wellington Cable Car with stunning views across the bay

The next part of our journey takes us to the South Island, including a hop across the Foveaux Strait to Stewart Island, returning to the North Island and a visit to the Coromandel before leaving for home. Lots to do and if the rest is like the North Island, plenty to look forward too.

This entry was posted in Travel and tagged new zealand, photography. Bookmark the permalink.