A journey, not a destination

For generations of Pewsey’s, it was a right of passage to have your photo taken outside Pewsey Post Office in Wiltshire.

My mum outside Pewsey Post Office in the 1960s

According to Wikipedia, “Pewsey is a large village and civil parish at the centre of the Vale of Pewsey in Wiltshire, about 6 miles (9.7 km) south of Marlborough and 71 miles (114 km) west of London”. It’s a lovely rural part of the World and boasts Avebury Circle, a UNESCO World Heritage Site, and many White Horses carved in to the chalk downs. So well worth a visit.

It wasn’t until a few weeks ago that my wife Lynda, even though we have been together for 10 years, had yet to have the honour bestowed on her. So we decided to pay the area a visit.

We booked a BnB called ‘No 7” in Marlborough that was quirky and great value for money with a fabulously large room and very comfortable bed, for a couple of days. We headed up the A303 from Devon in our open-top Mazda MX5 stopping at the Haynes International Motor Museum on the way. A place I have passed so many times and never stopped to visit.

It’s enormous with a huge collection of motor vehicles from around the World. We spent a few hours there before heading off to Pewsey. We had no set time to get there by so we decided to avoid the main thoroughfares and enjoy the journey and some open top motoring.

We broadly followed the route to Pewsey of the Cossack motorbike and sidecar trip I had undertaken earlier in the summer, following single-track lanes and B roads towards our destination. It was such a pleasure to enjoy the journey rather than being fixated on a destination for a change and something I intend to do more off from now on.

Unfortunately, Pewsey Post Office has now updated its signage. Long gone is the old simple sign that served the building for many years and in its place is a “standard” Post Office issue red and white sign. It’s just not the same! So a new landmark is needed to record our visit and future Pewsey generations. Fortunately, in a number of locations into the town, the ‘Welcome to Pewsey’ signs have been upgraded and form a fine substitute. Lynda is now ‘officially’ a Pewsey!

With the formalities out the way we continued to the beautiful but busy town of Marlborough where we based ourselves for the next few days whilst we explored the area. Marlborough is one of the few English towns and cities that isn’t, fortunately, a clone location. By that I mean that every shop is not part of a national chain that appears on practically every other High Street in the country. For example, the main shopping areas of Exeter, Plymouth and Taunton in my neck of the woods are predominantly identical regarding shops. There are still local shops to be found but very much in the minority. An exception to the rule is Totnes in Devon and Marlborough and much the better they are for it.

The UNESCO World Heritage Site at Avebury is definitely worth a visit as one of the greatest marvels of prehistoric Britain. Avebury henge (the ‘henge’ that you can still get up close and touch, unlike its near neighbour Stonehenge.) and stone circles are  built and much altered during the Neolithic period, roughly between 2850 BC and 2200 BC, the henge survives as a huge circular bank and ditch, encircling an area that includes part of Avebury village. Within the henge is the largest stone circle in Britain – originally of about 100 stones – which in turn encloses two smaller stone circles.

To keep the local village free for the residents who must get sick of all the visitors, the National Trust run a pay and display car park. I must admit I am not a fan of the National Trust as an organisation due to its arrogance and the way its treats its tennants, although I do welcome the work they do preserving the countryside. So as they are not registered with the BPA or IPC (British parking trade associations) and they don’t display any parking terms and conditions, they cannot enforce the car park (correct as of Aug 2019), common with many NT car parks around the country. To visit the Manor the NT again charge you another fee on top of the car park. The circle itself is not owned by the National Trust but operated by English Heritage

To the south of Avebury is the Alton Barnes white horse. A fabulous circular walk can be enjoyed taking in the white horse. It’s an easy walk. A short gentle climb on to the ridgeline then it’s mainly flat all the way around.  It’s a fabulous spot and if you have the time, take a flask and some sandwiches and enjoy the stunning views of Wiltshire which stretch for miles before you from your picnic site. 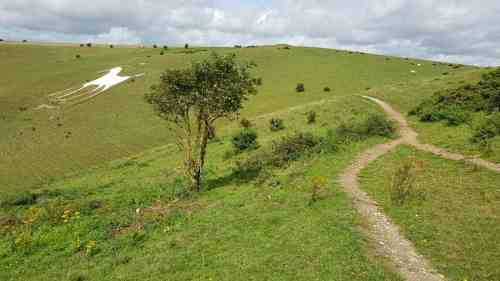 The website ‘Wiltshire White Horses’ (www.wiltshirewhitehorses.org.uk) has lots of information about this and the other white horses in the area and worth a visit so you can plan what to see.

So, when you can, take the time out to enjoy your journey and take some of the thousands of minor roads around the country to your destination rather than the clogged up trunk roads. I think you’ll be pleasantly surprised at how beautiful the UK is.

This entry was posted in Travel and tagged pewsey, wiltshire. Bookmark the permalink.